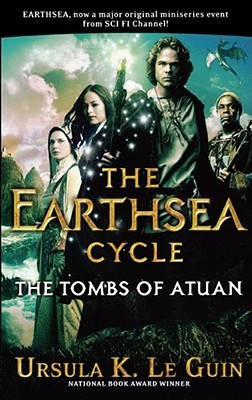 The Earth is beautiful, and bright and kindly, but that is not all. The Earth is also terrible, and dark, and cruel. The rabbit shrieks dying in the green meadows. The mountains clench their great hands full of hidden fire. There are sharks in the sea, and there is cruelty in men’s eyes. And where men worship these things and abase themselves before them, there evil breeds… (118)

The majority of this short book is dedicated to introducing the character, Arha, the High Priestess of The Nameless Ones in the Place of Tombs. She is a living artifact of a somewhat forgotten religion that is less relevant to the kingdom of the Godking that rules. Ged/Sparrowhawk, the protagonist from A Wizard of Earthsea, enters the book much later.

The worship at the Place of Tombs is very dark in nature. It involves frequent human sacrifice and trips into a labyrinth of tombs and treasure, where no light is permitted. Arha learns how religion means different things for different people. For some it is a pathway to power. For others it’s a way of life. And for many it’s something to do because there is nothing else to do. Gradually, Arha forms opinions on the hierarchy she participates in, and one by one divides friend from foe.

Arha inadvertently discovers Ged in the tombs one day. Ged is an outsider, a nonbeliever and heathen wizard. His presence defies everything Arha has been taught–he lights the darkness. Ged shows her there’s more in the world than what’s suppressed in the dark labyrinth.

I didn’t enjoy The Tombs of Atuan as much as A Wizard of Earthsea. I found Ged’s origin story to be more compelling than Arha’s…she comes across very self-righteous, condescending and self-centered. But this is a side-effect of her upbringing. As The Eaten One, she is placed on a pedestal and told the darkness is her domain. Sequestered at the Place, she only knows what the other priestesses have taught her. Yet she is just a girl, young and dumb, with no grasp on how vast and different the world is.

So by the end, Arha still has much to learn about herself, whereas, Ged had matured substantially by the end of his origin story. However, Ged also had the freedom to go on a journey of self-discovery. Thanks to Ged, Arha is just now finding this freedom and perhaps in the third book of the Earthsea Cycle, Arha will experience something more.

But he dropped his eyes, suspecting a flaw in his argument. ‘I just don’t want him beating on me all the time,’ he said at last. ‘I ain’t no dog.’ She sighed, and turned slightly away, looking out of the window. ‘Your Daddy beats you,’ she said, ‘because he loves you.’ (21)

One cannot read this book and overlook the concept of the father. In this story, paternal influence, more specifically, fatherly love is crucial to the process of self-discovery. The absence of that particular kind of love damages every single character. Yes, the father; protection, guidance, love. And when said influence is scarce or non-existent, it is sometimes replaced with a different source; a different paternal institution, a different Father. The Lord.

But this paternal connection does not work for everyone. It’s a source of conflict for the fatherless and loveless. Central character John is the best example. John cannot love the Lord because his father loves the Lord, yet the father does not love his son, John. It doesn’t make sense to John. Because of his confusion he refuses to be part of anything his father is devoted to…What’s the reason? Why can’t a father love his son?

John’s father, Gabriel, cannot accept what John represents. John is the embodiment of Gabriel’s sin. A younger Gabriel, impregnated a young woman, and out of fear and shame sent her away. She died young, as did her son—his son. To make up for his sin and to seek redemption, he decides to raise John as his own. You see, Gabriel believes he has been forgiven, that God knows his life, but Gabriel cannot forget. His hate of his former sins, emerges as hate for his sons.

And he felt his father behind him. And he felt the March wind rise, striking through his damp clothes, against his salty body. He turned to face his father—he found himself smiling, but his father did not smile (291)

When John finally accepts the Lord, he accepts his father. He accepts their dynamic, his fate and ultimately himself. And this is very interesting because it is exactly what his father did–accepted the Lord, but somehow continued to live in denial.