The outside press, when they look at this case, will be asking only one thing: what is in the best interest of the child? But we’re Cherokee and we look at things differently. We consider that the child is part of something larger, a tribe. Like a hand belongs to the body. Before we cut it off, we have to ask how the body will take care of itself without that hand (338)

Pigs in Heaven is the sequel to Barbara Kingsolver’s great novel The Bean Trees. I didn’t realize this was the sequel until I was about to start reading. I picked up a book I hadn’t heard of, in good faith because I trust the author. I love Kingsolver’s writing style and the characters she creates. They’re familiar. I talk more about this familiarity in my write-up for Prodigal Summer. Anyways, as I was saying, Pigs in Heaven is the follow-up–so what’s it about?

Kingsolver presents readers with a story about family and community and what it truly means to have a “home”. She asks: what are you a part of? what’s a part of you? And which is more important?

This story of Taylor and her illegal* adoption of Turtle might leave you conflicted. Is her home with the people who love her, or is it with her people**? I personally thought it should be the former. I couldn’t get over the feeling that the Nation, more specifically, Annawake Fourkiller, wanted Turtle just because they were legally entitled to her. They were not morally or emotionally connected to her. Especially, Annawake. She assumed many things about Taylor’s relationship with Turtle. And while her concerns*** over Turtle’s future of fitting in were valid, I didn’t believe they were genuine. Annawake, didn’t care for Turtle. Annawake cared about the Nation’s reputation…or better yet the symbolism behind taking Turtle from her white family and placing her in a house with people who looked like her (but were still by some definition strangers)

But I get it. There’s this pressing need or pressing belief to need to be connected to your history and culture…for many reasons related to reality. Surely, Turtle couldn’t grow up believing she was white. A mirror and peers would tell her otherwise. And it would be sad to never know anything about those who came before you and gave you life. Still…that’s accepting the assumption that Taylor would willingly choose to let Turtle lead a life of ignorance. And based on what we know of Taylor, I have a hard time accepting that. Don’t we give foster parents the benefit of the doubt? Maybe not…

Annawake Fourkiller represented what I thought to be a staunch preserver of tribal membership. In contrast, I found Sugar Hornbuckle, Taylor’s mother’s cousin (?) to be much more inviting when it came to discussing community. Sugar Hornbuckle may or may not be 1/16 Cherokee, but she’s still part of the Nation and her children are part of the Nation and her home is in Oklahoma among other members of the Nation. Sugar tells Taylor’s mom, Alice, that she doesn’t need to look or live a certain way to be Cherokee, she just is, if she chooses**** to be… I do find it somewhat ironic even the whitest of people can belong to the Nation if they find a name on a list. Their diluted blood and Anglo-Saxon appearances mean nothing. They are still of the community. Yet Taylor is criticized by Annawake on the basis of her whiteness and subsequent inability to raise Turtle properly. The good news is it all works out in the end…

It’s been maybe five years since I read The Bean Trees, and while some of the details of that book are not fresh in my mind, I still feel something along the lines of joy when I think about it. So expectations were raised with each page turn of Pigs in Heaven. And now I ask myself: did Kingsolver disappoint? was Pigs in Heaven worthwhile?

The answers to both questions are no.

Kingsolver offers readers a myriad of entertaining characters and surprisingly, this turns out to be both a good and a bad thing. The characters are hodge-podge–too mismatch and eccentric to be believable (in my opinion) I mean Jax, Barbie, Gundi (?) the list goes on…They’re all funny and interesting, but not realistic. And their humorous dispositions don’t mesh well with the very serious issue at hand; Turtle being taken away from the only mother she knows.

*begins in The Bean Trees

*** i.e. potential feelings of isolation and/or alienation related to appearance that may affect social behavior

****choice is a funny word here because to be a part of the Nation and vote, you have to locate the name of someone who you can prove is related to you by blood in records known as the Dawes Rolls . You’re shit out of luck if you can’t prove it, or if your family member didn’t have records, or for someone reason or another their name isn’t on the list (which is the case for some Black Cherokees and Freedmen) 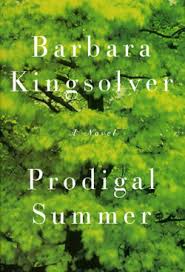 Barbara Kingsolver is one of my favorite authors. Her writing is earthy, romantic, didactic, sensual and eloquent. More importantly, her writing is familiar and comforting. In other words, she gets me. Growing up along the outskirts of Appalachia, I can relate to the frustration over the damn Kudzu that overtakes native scenery, the annoying stinkbugs that find a way into everything, the irksome pain of cockleburs stuck to your clothing and the awe-inspiring  perfection of apple orchards. I know the country, ‘hillbilly’ accent that is unavoidable if you wander north of Baltimore towards the mountains, or across the Bay to the eastern shore’s blend of marsh and farmland. This book is reminiscent of all of that…she gets me.

‘Why does everything make you so mad?’ she asked finally. ‘I only wish you could see the beauty in it.’

‘In what?’ he asked. A cloud passed briefly over the sun, causing everything to shift a little.

‘Everything’. She flung out an arm.’This world! A field of plants and bugs working out a balance in their own way.’

‘That’s a happy view of it. They’re killing each other, is what they’re doing.’

‘I’m going to have to take exception to that.’

‘Oh? Are you thinking you got here some way different than the rest of us?’

Not only does Kingsolver give readers beautiful descriptions of nature, she offers them great, authentic characters. The super-long exchange from above is between Nannie Rawley; hardcore anti-pesticide/insecticide activist and organic apple grower, and Garnett Walker; bitter, old man and American Chestnut revivalist. They’re neighbors and they disagree on basically everything. Most of their interactions are philosophical debates, which are quite comical. Garnett Walker’s narrow-mindedness and conservative simplicity is so cute– he’s just old-fashioned, I guess.

The reader will also encounter Deanna Wolfe and Eddie Bondo. She lives on the mountain as a park ranger and he’s sort of a vagabond hunter. He wanders onto her mountain one day, they meet and play house for the summer, until he decides it’s time to find another mountain. They share some intimate moments (nothing over the top) but they also disagree on a singular, pressing issue that neither will budge on. Deanna is one of my favorite characters. I can empathize with her in a way; comfort in solitude and living as a ‘tall’.

Last but not least is Lusa Landowski, and her painful integration into the Widener family. She’s my other favorite–an outsider, an educated, city girl. In my opinion, she faces the most difficult obstacles, but is able to overcome them like a champ. I don’t know if I would have done the same in her situation.

Solitude is a human presumption. Every quiet step is thunder to beetle life underfoot, a tug of impalpable thread on the web pulling mate to mate and predator to prey, a beginning or an end. Every choice is a world made new for the chosen. (444)

This is a story about the different kinds of love one can experience and the interconnectedness (I think that’s a word) of everyone and everything.