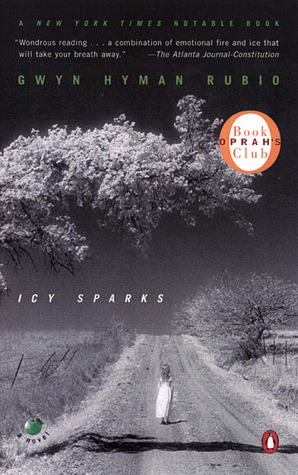 No, Miss Emily had not a clue as to what ailed me. She could stop herself from eating. I, on the other hand, couldn’t help what I did. My urges controlled me. Nevertheless, in Miss Emily’s eyes, we were the same. She was the orphan of Ginseng; I was the orphan of Poplar Holler. If she had her way, she’d used our strangeness to unite us (38)

Icy Sparks is a serious yet playful story of a young girl named, Icy Sparks, whose adolescence is marred by tics and outbursts she cannot control. Icy learns the value of the truth from a young age. She knows how her parents died and how their dispositions may have affected her own. She knows she’s different and feels her difference should be kept a secret. But the longer Icy keeps her secrets, the longer the pressure builds and the greater the outburst. These outbursts drastically affect Icy and her relationship with everyone in the small rural Kentucky community.

Icy is a great character. I can’t decide if she’s rudely honest or honestly rude. Either way it’s charming. I think the author is successful at spotlighting a seriously misunderstood topic in a very humorous and relatable way. The narrative is sprinkled with bits like this:

I stared at Wilma’s stomach, which was puffing out more than usual, and at her mustache, which had become thicker and hardier in the past few weeks, and gagged at her being pregnant and even harder at the thought of her being the Virgin Mary. “Poor baby Jesus,” I whispered. (169)

There are similar interactions between Icy and her best friend and teacher, Emily. Icy spares no feelings about her friend’s obesity. They’re an interesting duo. I’m conflicted because I know Miss Emily loves Icy and wants to elevate her, but I don’t know by how much. I wasn’t always convinced she wanted Icy to do better—they’re outcasts together after all. I’m mostly referring to conversation they had over being ‘touched’. And by ‘touched’, I do mean intimately. It’s one of the more awkward sections of the book, yet completely necessary. Emily’s relationship with Icy works because there are good and bad parts to each person. Everyone has their own demons.

Icy’s resolution, her epiphany at the Revival left me perplexed. The atmosphere is so unlike the rest of the book and admittedly, it threw me off. I think Icy’s character is very likeable, interesting and believable, but to toss God in there when she wasn’t particularly religious was somewhat odd. At the same time, it makes sense because Icy could care less if she attended a Catholic, Baptist, or Methodist church. She really needed that feeling of community and acceptance. Icy was able to jump headfirst into something with no fear or threat of rejection. By singing with several church choirs, she can finally be part of the community that had estranged her since childhood.

We cannot lift up. Our tongues rot in our mouths from lack of use. Our hearts grow empty and lose strength for our purpose (193)

We’re given a few slices of miserable life.  Everyone in town is searching for something–an idea, a feeling, or a connection within to verify their existence. What they seek is in other people, in certain routines or motions. But their reasons for being and sustaining remain both feeble and obscure.

Of all the characters, one in particular, Dr. Copeland, is the most vibrant. Not vibrant in persona, but in his dedication to verify his existence. Dr. Copeland, a black, educated man, living in a small Georgian town during the 1930s, is staunch in his convictions because he believes without them and men like him, the entire race is doomed to failure; destined to remain at the bottom. Dr. Copeland is also unique because unlike many black people in his community, he does not look to God for empowerment. On the contrary, he looks to worldly solutions.

Some of you young people here this morning may feel the need to be teachers or nurses or leaders of your race. But most of you will be denied. You will have to sell yourselves for a useless purpose in order to keep alive. You will be thrust back and defeated. The young chemist picks cotton. The young writer is unable to learn to read. The teacher is held in useless slavery at some ironing board (193)

John Singer is another character of interest. Strangely enough, Singer is an anomaly in a community of misfits. Not because he cannot hear or speak, but because he seems to be a person everyone else needs. People come to him and they talk. Not with him, just to him and sometimes at him. A provident figure, Singer offers the miserable souls that cross his path simple things to enliven them; food, money, music. Because they can be themselves around him, they value Singer’s company and are happier. And when he leaves they lapse back into desolation. McCullers captures the gloom of living in a small, southern town, where the heart is a lonely hunter.