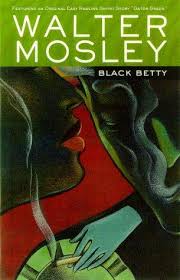 Home meant that everybody already knew what you could do and if you did the slightest little thing different they’d laugh you right down into a hole. You lived in that hole. Festered in it. After a while you either accepted your hole or you got out of it (31)

In this Easy Rawlins mystery we find Easy living with his son Jesus, and other adopted child, Feather. In the heat of an L.A summer, they’re scraping by, but they’re making it. Easy’s ready to settle down with a regular ‘9 to 5’ and abandon the underground private eye practice. He’s ready to get out of his hole because his family needs the consistency and safety. Of course, his desire to do so is blocked by another mystery. This time Easy has to find Black Betty, a woman from his past.

The reader is introduced to Black Betty via Easy’s flashbacks. Elizabeth, “Betty” was an around-the-way-girl. And she was the first woman to leave an impression on Easy. It’s obvious that Easy only wants to air out the mystery of her disappearance because she’s a notable person from his past.  The build up to meeting Betty outbalances the actual encounter and reason for why Betty disappears. In fact, the entire story line is somewhat cloudy, until the end, which turns out to be very simple and kind of boring. But the Easy Rawlins series has never been about story lines, it has always been about the characters. And the most important one, Easy, has changed.

Whiskey is a living thing capable of any emotion that you are. It’s love and deep laughter and brotherhood of the type that bonds nations together. Whiskey is your friend when nobody else comes around. And whiskey is solace that holds you tighter than most lovers can (144)

Once upon a time, if there was a problem, Easy would drink himself into oblivion. But he no longer desires that level of unconsciousness. Easy has matured since Devil in a Blue Dress. He’s still a risk taker, but he’s smarter, more sensitive, keen to everything and everyone around him. Not nearly as hardened by solitude, sex and savagery as he used to be. Easy knows he needs to be aware because if he isn’t, Fate may finally catch him.